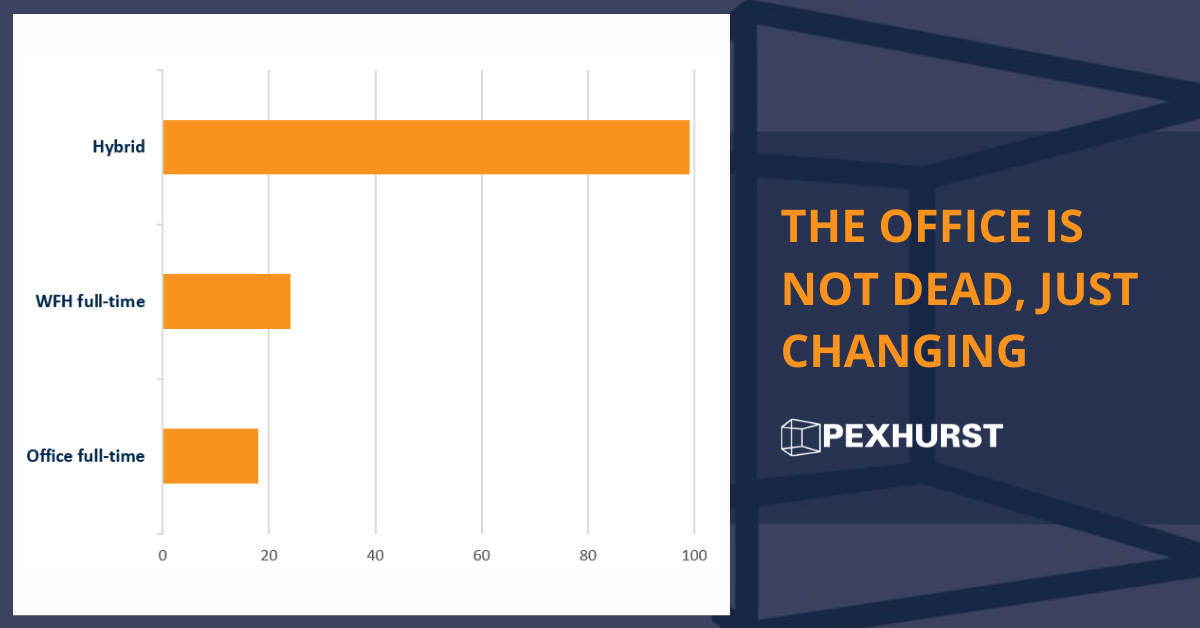 A graph showing the combined results from the two LinkedIn polls

With the lifting by the Government of Covid restrictions in England, attention has shifted for many to the question of a return to the office or not, and whether full-time or part-time.

To gauge the mood, we posted questions on LinkedIn seeking the opinions of a cross-section of people. The results were very interesting…

Firstly, we asked whether respondents wanted to be back in their offices full-time, preferred a hybrid model or permanent working from home.

As it turned out, it was this hybrid model that was the most popular choice for over three-quarters of respondents (76 per cent). The two full-time alternatives of either always in the office or always at home achieved identical scores having been chosen by one in eight (12 per cent) in both cases.

When we asked a similar question on LinkedIn once the Prime Minister plans had been announced for the end of Covid restrictions on 19 July, the results were comparable. Around one in eight (13 per cent) still said they were heading back to their offices full-time. The number saying they wanted to remain working from home full-time nudged up to one in five (19 per cent), possibly reflecting worries from media coverage at the time about face coverings and social distancing on the public transport commute to work. However, the hybrid option remained the overwhelming preference for the remaining two-thirds (68 per cent).

Of course, we don’t know the individual circumstances of those that responded, especially the one in eight who expressed a preference for working from home full-time. For example, it’s not uncommon for managers in the construction industry to spend much of the week on-the-road moving from site to site, with paperwork completed as easily from home as in the office. That is very different to sectors where face-to-face interaction is best done on company premises.

Banking and financial services, for example, seem to be exerting more encouragement on staff to return than several other sectors. Morgan Stanley chief executive James Gorman has said: “If you can go into a restaurant in New York City, you can come into the office.”

Beyond wanting to see his colleagues face-to-face, Gorman is also thinking of career benefits. This is especially the case for junior staff members who will get better training as a result. “Make no mistake about it. We do our work inside Morgan Stanley offices, and that’s where we teach, that’s where our interns learn,” he said. “That’s how we develop people. Where you build all the soft cues that go with having a successful career that aren’t just about Zoom presentations.”

This echoes our LinkedIn findings. In both polls, one in eight would prefer to spend all their time working from home. However, that still means that seven out of eight want to spend part or all of their weeks in the office. That’s why we say that the office is not dead, just changing.

Few people think that life will ever return to how it was before the pandemic. Many of the new norms are here to stay. Having proven that working from home can be productive and not an out-of-sight way to skive, the hybrid model is now a realistic opportunity.

As a result, workspaces can be reconfigured accordingly and cover different spaces. For the work areas, hot-desking could frequently replace traditional rows of fixed desks. That will improve inter-company networking since a neighbour may not always be the same each day. Storage requirements will also change, such as a place to securely keep the under-desk pedestals full of files and nick-nacks of people that aren’t in the office every day.

An environment of hot-desking creates opportunities and demands for break-out spaces for prompt meetings and informal discussions. This can change the fit-out spec such as additional tea-points or kitchens possibly changing the HVAC balance and needs.

Our two straw polls on LinkedIn showed that seven out of eight people still want to spend time in their offices. This will vary from sector to sector with high expectation for a full return by some, but not others. However, post-pandemic workplaces are unlikely to be as they were before Covid struck. This will create opportunities and demand for different layouts and approaches with the future of offices not dead, but changing.